The 17-year- old found out he had been selected for the prestigious program held last month during an announcement in front of Massachusetts Boys State that he attended June along with 350 other nominated juniors from schools across the state. He and one other Massachusetts student were elected Boys Nation senators by their colleagues.

“ I still think of that feeling I got when I was selected, it was truly nothing like I had ever felt before and since,” Nevard said. “ To be selected amongst a group of colleagues who were incredibly intelligent was beyond an honor.”

‘I found that the ability to communicate and have intimate conversations with others from across the country is the most fruitful way to gain new insights into topics.’ 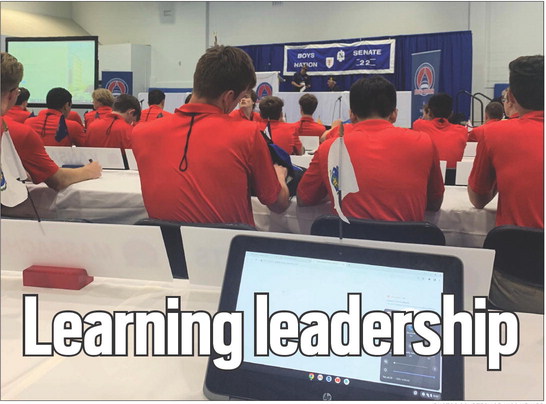 Outgoing Leominster High School Principal Steve Dubzinski said that each year the local American Legion Post 151 “ is generous and sponsors students to attend Boys State and Girls State,” which are among the most selective and respected educational programs of government instruction for U. S. high school students.

“ Leominster students have successfully and enthusiastically participated for many years,” he said, adding that Nevard is the first LHS student in over 25 years to move on from Boys State and attend Boys Nation. “ Nico is a tribute to his terrific family and a great example of our students at Leominster High School. He is goal oriented, articulate, smart, and he has a great future. Nico combines a great mind with a perseverance that exudes positivity and enthusiasm. He is a leader and will continue to accomplish greatness.”

LHS social studies and law teacher Rene Lafayette echoed his sentiments, saying that Nevard “ was a superlative student in Street and Practical Law class this past year” and “ would be a natural for a Mock Trial team that I hope we will have this year.”

“ Boys Nation is a top-tier government and leadership development program for high school students,” Lafayette said. “ For Nico to have been one of two participants from Massachusetts is an honor for Leominster High School and a great accomplishment for him personally.”

Lafayette also attended the program as a high school student and said that before Nevard left for D.C. he shared his own experiences with him.

“ Nico emailed me while he was attending Boys Nation and shared that he was learning so much about current issues facing America, how government works, and developed communications skills,” Lafayette said. “ What he learned from this program will be with him beyond LHS and positively impact his future.”

Nevard said a typical daily schedule during the July 22-29 trip included waking up around 6 a. m. for breakfast at 7 a. m. “sharp.”

“ From there it would be a mix of either a guest speaker, a trip to an important monument, or immediately into a session of mocksenate,” he said, adding that in between the events they had breaks and ate meals. “ The days would end off with meetings with our dorms to talk about everyone’s takeaways from the day and then usually getting to sleep around midnight.”

He met Sen. Ed Markey and Sen. Elizabeth Warren on Pennsylvania Avenue one day and said that while it was “ amazing” to visit iconic D.C. monuments including Capitol Hill, the White House, and National Mall, which he had been to before but said to “see it at night was truly surreal,” making connections with the other youth senators was one of his favorite aspects of the experience overall.

“ I most enjoyed the ability to communicate with people from other places around the country,” Nevard said. “ In Massachusetts we kind of sit in one corner of the country, so to have the ability to speak and connect with other people from around the country is just beyond surreal. Some of the best friendships I formed were from places that I likely never would have been able to connect with such as Indiana, Mississippi and Michigan.

“ While I obviously learned more about the Senate and the procedures in which our government operates, I also go back to the various things I was able to learn by speaking with others from across the country,” he said. “ On simple things such as the validity of referring to a water fountain as a bubbler, or on the topic of serious things such as the issues with inflation and health care and tips for applying to college. In conclusion, I found that the ability to communicate and have intimate conversations with others from across the country is the most fruitful way to gain new insights into topics.”

LHS Social Studies Department Head Daryl Robichaud said they send six representatives to Boys State every year and that Nevard being selected to attend Boys Nation “ is quite a significant accomplishment for both Nico personally and Leominster High School as a whole. We are all very proud of this prestigious accomplishment.”

He said he has known Nevard for a decade, having coached him in both baseball and basketball in various youth leagues, and that as a sophomore in his honors- level class “ Nico demonstrated a deep level of understanding of politics and government and I had noted they he would be a prime candidate for the Boys State program.”

“ I had no reservations in nominating him and obviously the full faculty shared my confidence in selecting him to be one of the representatives from LHS,” Robichaud said. “ He has certainly validated our confidence in him.”

Nevard said he is grateful for the staff and his teachers at LHS, “ mentors who have so far, and will continue to inspire and guide me” and that he encourages upcoming junior students to attend Boys or Girls State “ if given the opportunity, as I will forever be thankful for the gifts I was able to receive because of my time there.”

“ It was beyond an honor to be sponsored by the local American Legion,” he said. “ In times like these I realize that I am not as good with words as I sometimes think I am. I am simply unable to articulate a string of words that could appropriately give an idea of the gratitude that I feel towards the local American Legion for giving me this once in a lifetime opportunity.” 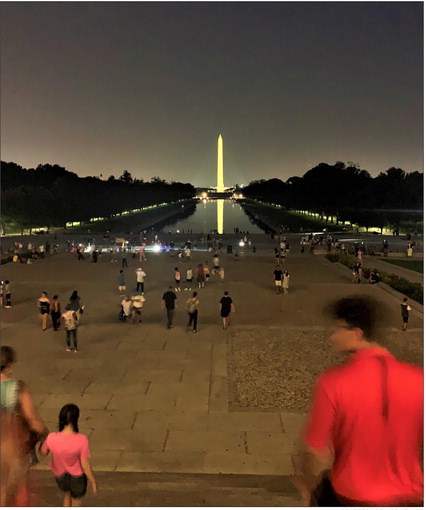 Nico Nevard had a chance to visit several Washington, D.C., monuments during his Boys Nation experience including Capitol Hill, the White House, and the National Mall, pictured above.